You are here: Home1 / Batman 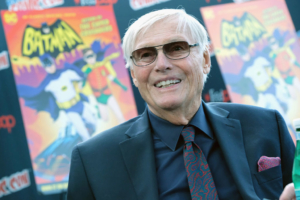 Many who have achieved celebrity and fame have worn our nation’s uniform.  They are veterans who have served and sacrificed. One of those stars was Adam West who gained overnight stardom as “Batman.”

West passed away on June 9th following a short battle with leukemia.

He was born William West Anderson on September 19, 1928, in Seattle, Washington.  West grew up on a farm outside of Walla Walla, WA before his parents divorced and he moved to Seattle to live with his mother and her new husband.

West graduated from Whitman College in Walla Walla, receiving a degree in English literature in 1951.   Later on, he attended Stanford University to do post graduate work in communications.  He dropped out after only six weeks to take a job at a Sacramento radio station.

West was drafted into the U.S. Army in the early 1950’s.   West served as an announcer on American Forces Network television. Later on in his acting career, having a distinctive voice, West built another career doing voice-over work. He also helped to launch a series of military television programs.

West was married three times.  He had six children and homes in Los Angeles and Palm Springs as well as a ranch not far from Sun Valley, Idaho.   He loved the ranch and spent a good part of his time there.

Before his famous iconic role, West made many guest appearances on television shows,  including Cheyenne, Maverick, 77 Sunset Strip, as well as a regular for one season on The Detectives.   He also had roles in movies such as Tammy and the Doctor, Robinson Crusoe on Mars and The Outlaws Is Coming, where he appearing alongside the infamous Three Stooges.

In the mid-1960s, West was appearing in television commercials.  He did several commercials for Nestle Quik chocolate.  They were parodies of the popular James Bond movies, and had an unexpected outcome.

The commercials caught the attention of William Dozier, a television producer at 20th Century Fox studios.  Dozier was looking for an actor to star as Gotham City millionaire Bruce Wayne and his crime-fighting alter ego, Batman.  Dozier’s Batman was to be a new television series for ABC, based on the DC Comic character created by Bob Kane and writer Bill Finger in 1939.  Batman premiered in January of 1966 as a twice-weekly, half-hour television program.  The rest was history, and Adam West’s life was never the same.