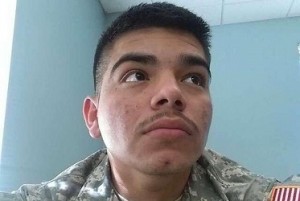 The loss of any life is never easy. But there is something more devastating about a situation when a Veteran survives their enlistment, only to be gunned down in their own neighborhood after returning home.

Just months removed from his Honorable Discharge from the U.S. Army, Francisco (Frankie) Garcia was killed by a gunshot wound in his hometown of Sylmar, California, early Sunday, November 9, 2014.

Garcia, 21, was attending a party thrown in his honor at his girlfriend’s parents’ home. As the evening grew late, Garcia and few of his friends decided to walk to another party that was happening nearby.

At approximately 2:00 am, two cars pulled up to the group of friends. One male suspect exited an SUV and began a verbal exchange with Garcia. The suspect then went to the second vehicle, a white sedan, and received a firearm from one of the vehicle’s occupants. The suspect began firing, and Garcia and his friends ran to escape the danger. Garcia was the only one who was shot. The Veteran died at the scene from multiple gunshot wounds.

Witnesses say that the suspect and Garcia knew each other, but the extent of their relationship, or how it came to such a catastrophic conclusion is not yet known. It is not believed that the suspect attended the party earlier that day.

On Veterans Day, a suspect was arrested in connection with the murder of the Veteran. LAPD arrested Sylmar resident Vincent Estrada, 18, while driving with his parents. Estrada’s bail was set at $1 million. It has not been confirmed whether Estrada is believed to be the shooter or one of the occupants in the two vehicles.

Family and friends report that the young Army Veteran had been working as a security guard, and was pursuing a career in law enforcement. He will be mourned as a Veteran, a son, a brother and a friend. Our condolences go out to the Garcia family, the community of Sylmar and the Veteran community. Rest in peace, Pvt. Garcia.

A GoFundMe account has been set up in Francisco Garcia’s name to help the family.