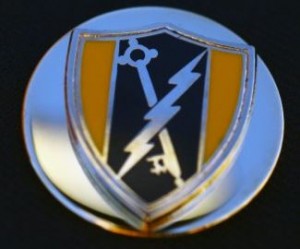 Ft. Sill is home to the Army Electronic Warfare School, a program that puts soldiers at the forefront of a key component of the Army’s overall fighting strategy.

Rather than fighting with bullets or bombs, troops are learning how to disrupt an enemy’s communications systems, using electromagnetic signals. Soldiers are also learning how to defend against such attacks.

Because it’s an ever-changing, ever-evolving threat environment, the school gives soldiers a highly technical education. They start with the properties of electricity and radio waves, and then move into electronic warfare systems.

In December, 2012, the Electronic Warfare Specialist Basic Course graduated the first 28 soldiers. They received the EW collar insignia at a graduation and cresting ceremony. A crest identifies a Soldier’s military occupational specialty, and inside the crest are symbols that describe a Soldier’s duties. The EW crest features a lightning bolt, key and shield.

The lightning bolt represents the Army’s intent to rapidly, decisively and precisely strike at the adversary with an electronic attack. The key symbolizes the means by which Soldiers unlock access to knowledge of the adversary, and the safekeeping of friendly capabilities and knowledge through electronic support and protection. The shield represents the unconditional commitment to electronically protect people, information and equipment from danger and harm.

Approximately 500 students graduate from the program each year. Strong math skills are really the only requirement needed to do well.

While they’re at the school, soldiers are exposed to a broad range of electronic warfare techniques, from jamming enemy communications to defeating radio-controlled roadside bombs. The program also trains soldiers to cope with a so-called hybrid threat, or an enemy that uses cyber attacks as part of a larger strategy that also includes conventional warfare.

Defense Secretary Ash Carter spoke to a group of national security experts and defense officials, saying that electronic warfare was one of several areas where the U.S. Defense Department was investing in hopes of countering threats and “challenging activities” made by Russia.