You are here: Home1 / Army drawdown 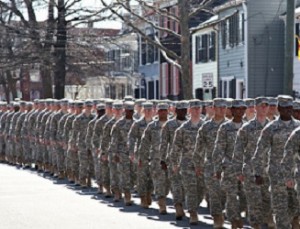 The latest move in the campaign to downsize the U.S. Army was revealed on August 1, 2014 when the Army announced that it will be letting go 550 majors (O-4).

The Army recently involuntarily separated almost 1,200 captains (O-3). Now the Army will be cutting 550 majors. The process began with an Army separation board reviewing approximately 8,500 majors whose service began between 1999 and 2003. Some of these men and women may have close to 15 years of service, depending on all criteria involved with credit for years of service, and might be able to retire. But most of the 550 won”t have enough time in the job for a military retirement.

The 550 majors will have nine months to leave the Army. Although not confirmed by Army officials, it is believed that a few of the selected officers are deployed in Afghanistan. A large portion of the officers will be eligible to join the National Guard or the Army Reserve, branches that are in need of competent officers.

The Army has tried to avoid cutting existing personnel by reducing its push for enlistments and creating incentives for voluntary separations.