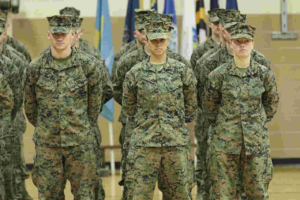 A large group of active-duty Marines are under investigation for sharing nude photos of female troops without their consent. And as the scandal widens, the Marine Corps’ commandant has stepped in with an official statement, calling on the victims to come forward.

“These allegations themselves, they undermine everything that we stand for as a Marine Corps and as Marines: discipline, honor, professionalism and respect and trust amongst each other,” said Marine Corps Commandant General Robert Neller.

Neller said the number of known victims identified is less than 10 so far. “But we would encourage anybody else who believes they’ve been involved in this to come forward… I’m going to ask them [victims] to trust us,” he added, while admitting that he understands this could be “a bit of a reach for them right now.”

The scandal, which was made public by reporter Thomas James Brennan of Reveal News, originally implicated Marines belonging to a Facebook group called Marines United who were sharing images of naked female service members, identifying them by name, rank and duty station.

Active-duty Marines involved in the photo-sharing ring can be charged with violating UCMJ Article 134, general misconduct, for enlisted troops, and Article 133, conduct unbecoming, for officers.

“We claim that being a Marine is a special title, and something that you earn,” Neller said. “There is honor here. But there is no honor in denigrating a fellow Marine in any way, shape or form.”

New reports suggest other services may face similar problems. A message board on another website has become a forum for posting the photos of female service members of all branches.

U.S. Secretary of Defense Jim Mattis responded with a message to those under his command:

“Lack of respect for the dignity and humanity of fellow members of the Department of Defense is unacceptable and counter to unit cohesion.”

Mattis added, “We will not excuse or tolerate such behavior if we are to uphold our values and maintain our ability to defeat the enemy on the battlefield.”

MilitaryConnection.com encourages any service member who believes they are a victim to come forward as soon as possible.