You are here: Home1 / Amos Patton 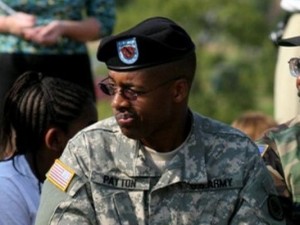 A Tennessee National Guard recruiter convicted of wounding three people inside an armory has been sentenced to 50 years in prison.

Amos Patton was convicted of nine charges, including four counts of assault with a firearm with intent to commit murder. The 14-year-Guard veteran had pleaded not guilty to charges that he tried to kill four Guard members when he opened fire inside the armory in Millington, northeast of Memphis. Three guard members suffered minor injuries in the shooting. A fourth soldier fought with Patton and helped subdue him after he fled.

The armory, which houses a recruitment office, sits across the street from Naval Support Activity Mid-South on land that used to be part of a larger military installation. Navy officials ordered a lockdown there during the tense minutes after the shooting, lifting it after word came that someone was in custody.

Authorities said Patton was angry after learning he was being removed from his job because a female soldier had accused him of sexual assault. After receiving his punishment on October 24, 2013, he and two superiors went to his government-issued car parked outside the armory. The three were going back to Patton’s office to retrieve a computer and take him to his personal vehicle.

Patton retrieved a bag and a fanny pack from the car, and after entering the armory, pulled the gun out of the fanny pack and started shooting.

Maj. William J. Crawford was shot in the thigh, and Sgt. Maj. Ricky McKenzie was hit in the foot. Lt. Col. Hunter Belcher was grazed by a bullet just below the right knee. Another round went through a backpack Belcher was wearing, grazing his back.

Crawford was able to wrestle away the gun before Patton ran out of the armory.

Addressing the court, Patton said he prays for the victims and their families and asks for forgiveness.