You are here: Home1 / Ameer Yousuf 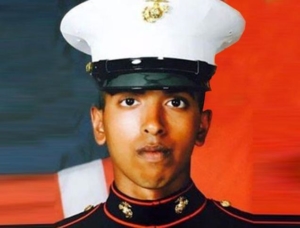 Hero is a word that gets tossed around a lot. By definition, a hero is a person of distinguished courage or ability, admired for brave deeds and noble qualities.

As the first shots of the mass shooting in Orlando were fired, Pulse bouncer Imran Yousuf’s first instinct was to escape. But he wasn’t just thinking of himself; he wanted to get as many people out of harm’s way as he could. He knew that on the other side of a group of panicked people was a door that would lead them to safety. But someone had to unlatch it.

“There was only one choice — either we all stay there and we all die, or I could take the chance, and I jumped over to open that latch and we got everyone that we could out of there.”

Yousuf managed to open the backdoor that led out into the street, evacuating more than 60 people. After he got them out, he began carrying the injured to ambulances outside.

In total, the former Marine of Indian descent saved between 60 and 70 of the clubs patrons.

Imran’s brother, Ameer, had recently moved down to Orlando from Schenectady to be with his brother and other family members.

“This was so unexpected but because of my brother’s training in the Marine Corps, he was prepared and used strategies from that to do everything he did,” said Ameer Yousuf.

Imran Yousuf joined the Marine Corps right after graduating from Niskayuna High School in 2010. He served as an engineer equipment electrical systems technician in the Marine Corps from June 2010 to May 2016, according to service officials. He was deployed to Afghanistan in 2011. He was last assigned to 3rd Marine Logistics Group.

“Because of his training, he knew to remove his security shirt and how to think as quickly as he did,” said Ameer Yousuf.

According to Ameer, his brother only regrets that he couldn’t save more people.