You are here: Home1 / aid victims 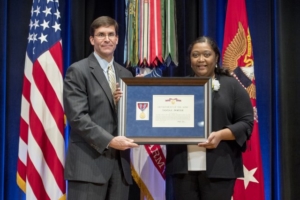 On December 18th, 2017, Tanya Porter, a nurse at Madigan Army Medical Center, was heading home after her 12 hour night shift, when she came upon a hoffiric scene: the Amtrak Cascades Train 501 had derailed onto Interstate 5.

The accident occurred during the train’s first trip on a new high-speed route to Portland, with all 12 cars coming off the rails atop an overpassing bridge and spilling onto the southbound lanes of the interstate.

Without thinking of her personal safety, Porter’s nursing training kicked in and she began to provide aid to the victims. Even after ambulances and paramedics arrived at the site, Porter continued to provide care.

For those actions, Porter has received the Army Award for Valor, which was presented to her by Secretary of the Army Mark Espe.  The Critical Care nurse set up a casualty collection site and conducted triage amidst the wreckage to save injured passengers from the fatal crash.

Nominated by Maj. Parker Hahn, the chief of the Madigan Critical Care Nursing Department, Porter’s actions were not surprising. “She’s an amazing nurse, she’s an amazing employee, but she’s an even better person,” said Hahn.

The award is the highest given by the Army to civilians for acts of heroism or sacrifice, according to the Army: “The heroic act must demonstrate voluntary action above and beyond the call of duty … Porter is one of only a handful of people who have received it.”