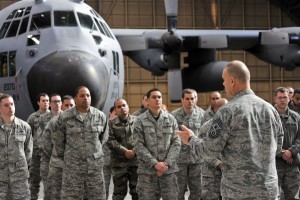 Ever since 2013’s sequestration threat, many Air Force airmen questioned whether they wanted to commit to long-term careers in active duty. Still desiring to serve in uniform and have the benefits of a military service, the Air Force Reserve offered the best of both worlds.

And now, the Air Force Reserve is offering large bonuses for in high-demand career fields. For many service members, joining the reserve components fills an obligation they incurred when they first signed up for active duty.

At bases across the country, reservists are picking up more of the slack and flying missions alongside active-duty airmen, and in some cases becoming even busier than their active counterparts.

The reserve’s effort was bolstered by the Air Force’s drawdown last year, which included an expanded Palace Chase program. Palace Chase normally makes enlisted airmen serve two years in the Guard or reserve for every year of active duty they have left, and officers typically must serve three years for every year left. But the expanded program allowed active-duty airmen to serve out the rest of their time in the Air National Guard or reserve.

The promise of money and the ability to use education benefits is the largest thing that gets airmen to join the reserve, along with the ability to continue to wear the uniform.