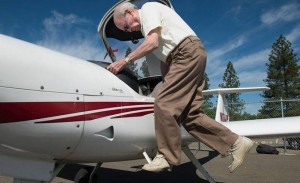 To get into the Guinness World Record books, people often do something crazy and outlandish. There are records for events like the tallest building climbed without a safety harness, or most pubs visited. There’s even a record for most consecutive daily video blogs on YouTube.  But for Pete Weber Jr., his world record is much more personal, because he’s been doing it for most of his life.

At the age of 95, Weber has earned a Guinness World Record for being the oldest active pilot. Previously, the record was held by Cole Kugel, who lived in Longmont, Colorado. Kugle flew for the last time in 2007 at the age of 105. Sadly, he died the same year.

Weber, a retired U.S. Air Force Veteran, was 95 years, 4 months and 23 days old at the time of his last qualifying flight. He and his son Peter Weber III started looking into the record after they wondered whether the elder Weber could be the oldest pilot in California.

Following an email exchange with Guinness over a number of weeks, the record keepers decided to open a new category: Oldest qualified pilot still licensed and flying solo. Weber’s flight wasn’t a long one, only 20 minutes, three loops around an area airfield, but it met the Guinness requirements nonetheless.

At the age of 95, most people are wondering if they should still be operating a car, let alone flying an airplane.

To continue as a private pilot over the age of 40, medical exams are required every 24 months. The number of pilots over 90 with valid medical clearances totaled 106 as of June 2013, according Ian Gregor, a spokesman for the Federal Aviation Administration’s Pacific Division.

With 72 years of experience, beginning with a military career in the Army’s combat engineers unit, Weber flew alone in a rented Diamond DA20. It’s one of 37 plane models he’s flown.

His flying career started when the Japanese bombed Pearl Harbor. Weber passed the test to be an aviation cadet and went into the Army Air Corps, the forerunner of the U.S. Air Force.

During World War II, Weber flew a P-38 fighter in the South Pacific, and was an instrument flight instructor during the Korean War. He even flew an AC-130 gunship in Vietnam.

Weber began as a private, and retired in 1970 from the Air Force as a lieutenant colonel. His flight skills have been put to use as a great way to keep his spare time fun.

“I like to fly,” he said. “I fly at least twice a month. I like to observe and take anybody up for a ride who wants to go.”

Weber credits his good health, mental acuity and long life to his diet and his wife Ruth’s cooking.

“My wife, Ruth, is a good cook,” he said. “We’ve been married 72 years. I was a cadet in primary flight training when we got married.”

As to his record, Weber says he isn’t competitive about it.

“If somebody passes me up, I’ll call them up and congratulate them.”