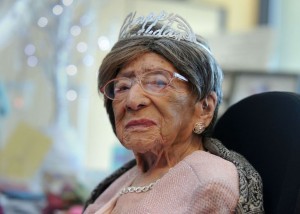 With a tiara on top of her head for the occasion, Dixon’s milestone was celebrated on September 11th with fellow Veterans, volunteers, staff and family at the D.C. VA Medical Center.

Cpl. Dixon has quite a story and quite a personality. She joined the military in 1943 and was stationed in both England and France with the 6888th Central Postal Directory Battalion.

During the war, warehouses in Birmingham, England, were filled with millions of pieces of mail intended for members of the U.S. military, U.S. Government personnel, and Red Cross workers serving in the European Theater. Airplane hangars held undelivered Christmas packages, and a constant stream of incoming mail added to the already massive backlog of letters and packages.

African-American women were drawn from the WAC, the Army Service Forces, and the Army Air Forces, and eventually designated as the 6888th Central Postal Directory Battalion, nicknamed “Six Triple Eight.”

One of the most prominent public events honoring the 6888th Central Postal Directory Battalion took place on 25 February 2009, at the Women in Military Service for America Memorial at Arlington National Cemetery. Dixon was joined by surviving unit members Mary Ragland and Gladys Shuster Carter for a 90-minute ceremony held by U.S. Army Freedom Team Salute, an official U.S. Army Commendation Program, to honor the 6888th.

Of her birthday celebration, Dixon said, “This has been a marvelous day. I feel real special.” She added, “God has been so good. He left me here with all these lovely people and all these nice things they’re saying. I hope they mean it.”