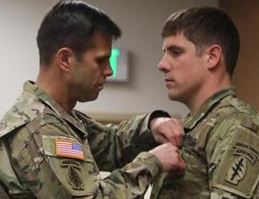 There was no time to wait for emergency personnel or to see if others on the highway would stop.

“We were the first there,” he said. “It was my responsibility.”

While his wife called 9-1-1, he ran to the wreckage and went to work.

Thus unfolded the events of October 10, 2016 when a single vehicle accident west of Asheboro, NC claimed two lives. But due to the actions of a brave Fort Bragg Green Beret, two lives were saved.

Staff Sergeant Adams, a member of 1st Battalion, 3rd Special Forces Group sprang into action without regard for his personal safety. To protect Adams’ identity, only his last name has been used.

Adams pulled Lillie Mingin, 33, and her surviving son, 7-year-old Eric, from the wreckage. Army officials said the pair likely would not have lived were it not for Adams, who rescued them from the vehicle and provided lifesaving medical care.

The Special Forces soldier has now been awarded the Soldier’s Medal, the Army’s highest award for heroism outside of combat. The Soldier’s Medal requires that a soldier do more than save a life. The soldier also must voluntarily risk his own life to save others.

During the ceremony at Fort Bragg, Adams’ heroism was celebrated by more than 100 Special Forces soldiers and members of his family.

Front passenger seat, Brittany Goodman, 26, was ejected from the vehicle and pronounced dead at the scene. Mingin’s 12-year-old son, Colby Springle, died shortly after the crash. The accident report quoted witnesses as saying Mingin was not speeding at the time of the accident, thus speeding is not suspected as being a factor.

“It takes a special person to do what he did,” said Army Maj. Crocker, acting commander of the 1st Battalion, 3rd Special Forces Group.

“Staff Sgt. Adams saw four of his fellow human beings in desperate need of help,” Crocker said. “And in trying to save them, proved that the Army’s “capacity to do good in this world is not limited to the battlefield.”

And that is what a hero does. 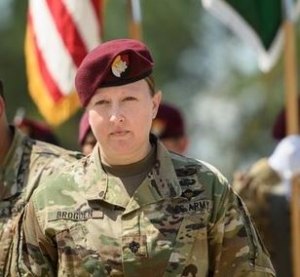