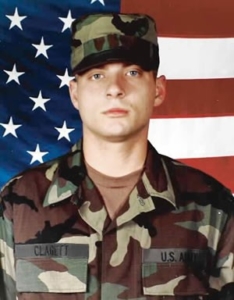 On May 9, 2006, Corey Clagett and his squad participated in Operation Iron Triangle in Thar Thar, Iraq. It was there and then that the 21-year-old U.S. Army private in the 101st Airborne Division said that he followed an order that would change his life forever.

Clagett’s squad had been dropped by a Blackhawk helicopter on to a tiny lake island that was an al Qaeda controlled terrorist training camp. The rules of engagement were to kill all military-aged males in the area. When they caught three such men hiding in a house, using two women as human shields, Staff Sergeant Raymond Girouard, the squad’s leader, ordered Clagett and another low-ranking member of the squad to let them go – and shoot them as they fled.

Clagett, who was released earlier this year after serving 10 years of an 18 year sentence at the U.S. Penitentiary in Leavenworth, Kan. recognized that that he had been given an unlawful order. But fearful of disobeying an order and the consequences if the detainees were released and able to provide information to al Qaeda, Clagett obeyed.

Supporters of Clagett and others in the “Leavenworth 10,” the name given to a fluctuating group of men imprisoned at Leavenworth for actions in Iraq and Afghanistan, say the men were scapegoats for their superiors.

Their cases have garnered online petitions and brought together military veterans and legal students who believe justice is not always served in military courtrooms far removed from the heat of battle.

Clagett was paroled on March 31st.  His case drew the attention of the University of Chicago Law School’s Combat Clemency Project, which is petitioning the Army for a full pardon of his conviction.

While a pardon would not condone the shooting, it could help Clagett rebuild his life.

Clagett is now a community and veterans liaison with United American Patriots, a North Carolina nonprofit that helps service members who face injustice. The group helped Clagett win an early release from an 18-year sentence after learning the details of his case.

Do you think any part of this was fair?