Military Blog
You are here: Home1 / Push On to Name Navy Ship after Iwo Jima Photographer 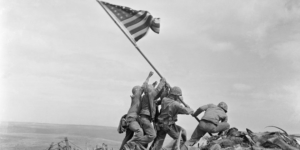