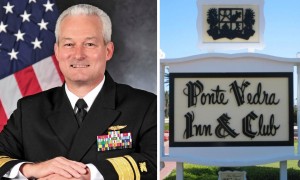 A two-star admiral who got drunk and wandered naked around a Florida hotel while attending a conference has been found guilty of disorderly conduct and conduct unbecoming an officer.

Rear Adm. David F. Baucom, the director of strategy and policy at the U.S. Transportation Command, became so intoxicated at an upscale beachfront resort in April that he required an escort back to his room.

A few hours later, still in a haze, Baucom re-emerged from his room without any clothes on, and then locked himself out of his room. As he stumbled through Ponte Vedra Inn and Club, searching for a towel to wrap around his waist, he was reported to hotel security.

Baucom has since been transferred from his post at U.S. Transportation Command and reassigned to the Pentagon, Navy officials said.

Baucom has accepted full responsibility and accountability for his actions. He said that four doctors have concluded that his drinking that night was probably exacerbated by a heart problem that left him lightheaded, disoriented and confused.

“I have served the Navy for more than 34 years and am proud of our institution,” Baucom added in his statement. “I deeply regret my actions caused discredit to the Navy I love.”

Navy investigators acknowledged that Baucom was taking prescription medicine that might have made him dizzy or drowsy, but said that there was no question that Baucom was intoxicated.

This incident is the fifth time in two years that an admiral or general has lost their job or been punished by the armed forces for alcohol-related behavior.

Army Brig. Gen. Sean P. Mulholland, who oversaw U.S. commandos on counternarcotics missions and training assignments in the region, also got into altercations with civilians on two occasions last year after drinking at a golf club bar near his Florida headquarters, according to military records. Mulholland, 55, was removed as commander in August. At the time, military officials said in a statement that he was “retiring for health and personal reasons,” but they withheld the fact that he had been investigated and reprimanded for misconduct.

In another case, a two-star Air Force general in charge of nuclear weapons was relieved of command for drinking too much and hanging out with suspicious women during an official trip to Moscow.

Additionally, an Army major general in charge of a counterterrorism task force in Africa was fired for excessive drinking. Finally, an Air Force brigadier general was cited by investigators for repeatedly drinking on duty and keeping a vodka bottle in his desk.

Baucom told investigators that he had been drinking while attending a dinner for the National Defense Transportation Association’s Transportation Advisory Board. He said he didn’t feel the effects of the alcohol until he was sitting at a hotel bar and it suddenly hit him “like a ton of bricks,” according to the inspector general’s report.

Although Baucom said there was much he didn’t remember about his actions that night, he clearly recalled why he wasn’t wearing any clothes; he failed to pack his pajamas.

Fleet Week 2016 Coming to the Port of Los Angeles