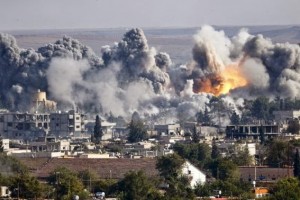 The U.S. has won battles, destroyed targets, and saved towns from ISIS, but we might not be winning a war that carries with it a massive price tag.

The air war against the Islamic State group has cost the American taxpayer $5.5 billion, roughly $11.2 million per day. This is a $2 million increase since June, this according to the latest Defense Department data.

The Air Force accounts for $3.75 billion of that cost, totaling roughly $7.7 million/day since the U.S. began launching airstrikes in August, 2014.

In 2015, the Air Force conducted 21,000 sorties over Iraq and Syria, 9,000 of which included at least one weapons release. For the first time, in the last two months of 2015, the Air Force surpassed over 3,100 dropped bombs during Operation Inherent Resolve.

Recently, the U.S.-led coalition blew up a warehouse in Iraq where the Islamic State held millions of dollars in cash, a defense official confirmed.

U.S. allies have stepped up their targeting of the militant group following the November 13th terrorist attacks in Paris, which killed 130 people. The Islamic State group claimed responsibility for the attacks.

According to Defense Secretary Ash Carter, the United States will convene a meeting next month of defense ministers from 27 countries participating in the fight against the Islamic State. The meeting in Brussels will focus on how each member of the coalition could contribute more to defeating the extremist group, assist with the reconstruction of cities that were held by the Islamic State, and on countering the group’s propaganda.