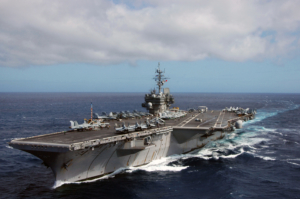 Currently, a United States Navy Strike Group, a force President Trump has described as an “armada”, is en route to the western Pacific. The strike group heading towards Korea includes the nuclear-powered flagship aircraft carrier, the USS Carl Vinson, two destroyers and a cruiser. Such a strike group may also be accompanied by submarines.

Referring to North Korean leader Kim Jong-un, Trump said: “He is doing the wrong thing.” Asked if he thought Kim was mentally fit, Trump replied: “I don’t know. I don’t know him.”

According to North Korea’s newspaper, Rodong Sinmun,”Our revolutionary strong army is keenly watching every move by enemy elements with our nuclear sights focused on the United States invasionary bases that are not only in South Korea and the Pacific operation theatre but also in the United States. main land.”

Defense Secretary, James Mattis, said the deployment is a matter of prudence. “She is just on her way up there because that is where we thought it was most prudent to have her at this time,” he said at a Pentagon news conference.

“I think there is not any evidence that North Korea has that capability at this time,” he said. “Threatening something that you don’t have the capability of isn’t really a threat.”

North Korea has conducted five nuclear tests, two of them last year, and is working to develop nuclear-tipped missiles that can reach the United States. This presents President Trump with perhaps his most pressing security issue. It has been said that President Obama told then President-elect Trump that Korea would be the most critical concern of his administration.

Trump tweeted, “If China decides to help, that would be great. If not, we will solve the problem without them!”

Editor’s Note:   These are very scary times for all. I have had the opportunity to spend time aboard a United States aircraft carrier. My biggest take away from the time aboard is that our Navy is constantly training and dedicated to being the very best.   We are in good hands.

Millions of Dollars Stolen In Afghan RebuildingStarbucks plans to hire 240,000 people over the next five years Scroll to top
Follow a manual added link