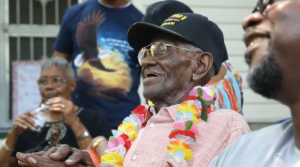 Overton was born May 11, 1906, and like most Americans, he answered his country’s call to service during World War II. He served in the South Pacific from 1942 through 1945, including stops in Hawaii, Guam, Palau and Iwo Jima.  Sergeant Overton left the U.S. Army in October 1945.

Following his military service, Overton worked at local furniture stores before taking a position with the Texas Department of the Treasury in Austin. He was married twice, but never had children.

Over the last few months, Overton has had to give up a few things, such as driving his truck, and he has cut down on drinking whiskey. But he is still chomping on cigars.

In 2013, Overton was invited to the White House, where he met President Obama during an honor flight trip. He told the President “I smoke at least 12 Tampa Sweet cigars a day.”

The spry centenarian celebrates his birthday every year in his yard, and this year was no exception, as Overton was surrounded by family, friends and admirers

With the exception of a bad bout of pneumonia late last year, he has been relatively healthy.

Overton doesn’t really have an explanation as to why he has been blessed with such a long life.

“You have to ask God about that. He brought me here and he’s taking care of me, and nothing I can do about it. I can talk about what he’s doing for me.”

Needless to say, this Veteran is well loved by his friends, family and neighbors. When asked how it felt to be 110, Overton said he felt like he was 50.

“He considers himself our neighborhood watchdog, and he knows everything that’s going on,” neighbor Helen Elliott said. “I don’t think the neighborhood would be what it is without him. He’s our legend, our icon.”

Military Connection proudly serves those who serve in the Army, Navy, Air Force, Marines, Coast Guard,Guard and Reserve, Veterans and their Families.

Should Iraqi Who Saved US Servicemember’s Life Receive Asylum?Should Women be Required to Register for Selective Service? Scroll to top
Follow a manual added link