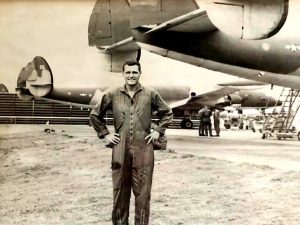 In 1964, I started flying missions as a flight engineer on C-124 aircraft making a trip every month to different bases in Vietnam. The trips were long, as the airplane was very slow. Each one took around 14 days and we logged about 112 hours of flying time. I remember picking up my first deceased Army person that first year. There was a flag-draped aluminum casket and a ceremony with pallbearers – it was a pretty sad occasion. We delivered the remains to the military mortuary in Hawaii where all human remains were to be delivered during the entire war.

Noteworthy was the way that ceremony was to change over the years. It wasn’t too many years and the body count would go up to the point that, not only was there no ceremony or pallbearers or flags, but the human remains were loaded on pallets and raised up into C-124 on an elevator. In 1965, I changed to the C-141 jet cargo airplane. I would continue these missions for a total of 10 years, taking a break from 1968/69 when I got orders to fly C-121R recon aircraft out of Korat Royal Thai AFB, Thailand, flying missions over Vietnam, Laos, and Cambodia. After this tour, I was assigned to McGuire AFB, NJ flying C-141s again, but going to Vietnam by way of Alaska. There were a lot of Air evac, cargo, and troop missions, also. I ended my 20-year Air Force career flying my final mission to Saigon in April 1975, helping with evacuations as the base was being overrun. But that is another story…