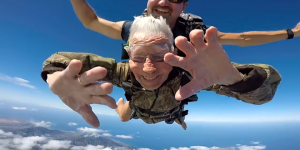 There are many ways to celebrate another trip around the sun. Birthday cake, candles – parties and presents. Retired Army Master Sergeant Polito “Paul” Olivas didn’t think any of the normal fanfare was quite enough. He decided to celebrate his 100th birthday by reliving his glory days – and jumping out of an airplane.

Olivas has spent decades of his life doing just that – he jumped out of a plane over Normandy. Jumped out of another at the Battle of the Bulge and even more in Korea. A Veteran who served in WWII, the Korean War and Vietnam, he has more than 300 skydive jumps under his belt – though all of them were before his 100th birthday.

His celebratory century birthday jump was sponsored by the nonprofit Sea Inspiration and Sky Dive Hawaii. The current age record for skydiving is 103. Olivas seems ready and his friends think he is up for the challenge! Stay tuned for August 2021!

Check out the video of the jump here… https://www.stripes.com/news/former-green-beret-who-jumped-on-d-day-celebrates-100th-birthday-with-skydive-1.544989