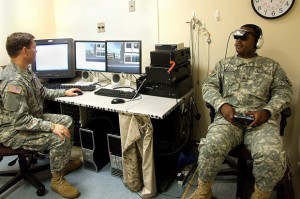 For Veterans suffering from Post-Traumatic Stress Disorder, known as PTSD, sometimes all hope of coping with it can be lost. Landstuhl Regional Medical Center (LRMC) is hoping to change that with their new Virtual Reality Exposure Therapy, or VRET for short.

VRET is a virtual reality experience that mimics a deployment scenario, complete with the look, the sounds, and even the smells of a particular deployed environment. The point of VRET is to help revisit and cope with the events that have affected a Veteran suffering from PTSD, due to a personalized experience..

Since the Wounded Warrior Project donated the program less than six months ago, some 30 patients have been treated at LRMC, all experiencing positive outcomes.

VRET is used to help patients with a particular trauma that they have not been able to resolve through other forms of treatment.  One soldier in particular was unable to emotionally heal after losing his best friend in a firefight when they were ambushed. The VRET team was able to give the soldier a recreation of the incident where the soldier walked into the building and was able to stay in the virtual doorway for around 15 minutes.

Understandably, the soldier was nervous the first time, but he was then able to experience the scenario, over and over again, until he could enter the building and move around with motors going off and insurgents attacked the streets below him.

“It’s an extremely effective treatment because it is a patient’s personalized reality that they learn to process, control and regulate,” said Maj. Dr. Michael Valdovinos, chief of outpatient behavioral health at LRMC.

According to Valdovinos, the repetition of virtually recreating the events helps soldiers decrease their anxiety and fears surrounding the event, while helping them learn to process the negative thoughts surrounding the traumatic event they endured. He went on to say, “Visual memory is powerful, and if I can use that to help patients create their own movie scene, then they can move into it to rewrite their own script.”

LRMC has been operating since 1953, and is the largest American hospital outside the United States, located in the German state of Rheinland-Pfalz. It is the only Army installation within Europe to offer VRET. The facility also offers innovative therapies to help Veterans learn relaxation techniques.