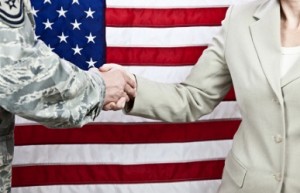 On December 9, 2014, the Tax Increase Prevention Act of 2014 was introduced into the U.S. Senate and placed on the legislative calendar. By a vote of 378-46, the bill passed through the House as H.R. 5771 earlier in the month, and is expected to have little difficulty passing through the Senate. But the bill does have the potential to become a political football, vied for by both sides of the political aisle.

Veterans and employers who hire Veterans should be very interested in the outcome of this bill in the Senate. Two Veteran employment tax credits were included as part of the larger bill. Both were previous government programs that gave American employers incentives to hire Veterans.

The Work Opportunity Tax Credit (WOTC) is a Federal tax credit available to employers for hiring individuals from specified target groups who have consistently faced difficulty in obtaining employment. Veterans make up one of these target groups, especially female Veterans and Veterans from the Global War on Terror era, which have consistently had unemployment rates far above the national average.

The Employer Wage Credit (EWC) offers a tax credit to businesses that employ members of the active duty military.

The bill that the House passed, and that the Senate will now consider, approves a one-year renewal for these two tax credits, as well as over forty other tax provisions that expired at the end of 2013. Previous bills were unsuccessful in their attempts to get long-term extensions approved for these same programs. The extension of these programs now would allow further consideration for these programs in 2015.

Renewing the expired tax credits will do much to secure employment for Veterans and members of other target groups.  For businesses, renewing the measures could provide tax credits for hiring Veterans, promoting renewable energy, and even for their research and development expenses.

President Obama has supported many previous measures and programs that promote Veteran employment, including Joining Forces, a national Veterans initiative launched by Michelle Obama and Dr. Jill Biden. The president had previously stated that he intended to veto similar measures that contained longer-term and permanent extensions for many of the tax credits contained in the Tax Increase Prevention Act. But it is believed that the president would not be against signing this short-term proposal, if it can make it through the Senate. We hope for the president’s continued support, specifically in relation to this legislation.

MilitaryConnection.com is a champion of promoting legislation that benefits Veterans and the military community. To that end, we continue to urge you to contact your Senators and tell them how to vote on YOUR behalf. For this bill, and with all upcoming bills, be sure that your legislators are aware of how their constituency wants them to vote. To locate how to contact your senators,  go to http://www.senate.gov/ (at the top right of the home page). If your legislators consistently vote against your wishes, you may want to remember that come election time.