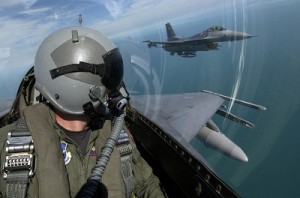 Since 2001, the U.S. military has been engaged in constant warfare against enemies who do not possess anywhere near the level of technology and training that our forces have. Because the fighting has been mainly ground combat in Iraq and Afghanistan, our Air Force has been mostly grounded, in terms of both fighting aerial battles and researching new advancements in warfare that would be needed to fight an opponent closer to our technological equal.

During the wars in Iraq and Afghanistan, most of the budget for every military branch was spent on manpower and logistics needed for those campaigns. Training for fighting advanced military forces took a backseat.

Now that our forces are currently out of Iraq and in the process of withdrawing from Afghanistan, the Air Force is the first branch to jump at the opportunity to prepare itself to fight an adversary that possesses advanced weaponry and defense systems.

This entails training jet pilots to combat surface-to-air missiles, in order to expose them to as-close-to combat scenarios as possible. During the Vietnam War, the Air Force discovered that most pilots were going to get shot down within their first ten combat missions. With that in mind, if the Air Force can make their training as complex and representative to combat as can be, they can almost provide the equivalent of the pilots’ first ten missions in a training environment, thus sending more experienced pilots into the skies.

One of the main training centers for training of this type is held at Nellis Air Force Base, near Las Vegas. Nellis is home to the Air Force’s Red Flag air combat exercise. Red Flag provides Air Force pilots with the intense, chaotic training regiments that are intended to replace a new pilot’s first ten missions. Programs such as Red Flag saw a huge drop in funding during the past twelve years of war.

With constant threats of war looming in several corners of the world, the danger of possibly having to fight an opponent closer to our operational capabilities is real. Russia’s daily infringement on Ukraine’s sovereignty, the war in Gaza, and the ever-present possibility of increased tensions with North Korea, Iran and a number of other nations could send America to war with countries that are equipped with weapons more advanced than those of Al Qaida and the Taliban.

Let us hope that diplomacy will continue to keep our nation’s citizens and interests safe from harm. But our military needs to be prepared in case the day comes when diplomacy fails.