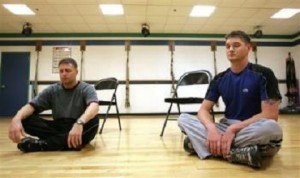 Before American service members are deployed to a combat zone, they are trained on nearly every aspect of warfare. They are prepared, as best as humanly possible, for every scenario and contingency. While our military’s method of training leads to successful mission accomplishment, there is a growing rate of post-traumatic stress disorder symptoms among Veterans. Researchers are trying to determine if, along with combat training, service members were trained in relaxation exercises such as meditation, deep breathing and yoga, would they be better equipped to defend against PTSD?

MilitaryConnection.com supports the David Lynch Foundation, a non-profit organization that has seen amazing results from the utilization of meditation. A study conducted at the University of Miami contends that meditation for soldiers in the months leading up to deployment can shield against mental lapses.

Other studies, including one conducted at the University of Wisconsin-Madison’s Center for Investigating Healthy Minds, are researching to determine if meditation, yoga and deep breathing can help Veterans with PTSD.

The University of Miami study expands on the principle that one of the best ways to protect service members from mental health issues is by training their minds, much like they train for physical challenges.

The UM research team, led by neuroscientist Amishi Jha, studied 75 active duty U.S. Army soldiers from Schofield Barracks, Hawaii, who were eight to ten months away from deployment to Afghanistan. The soldiers were given eight hours of mindfulness training over eight weeks, as they prepared for deployment. After their deployment, the soldiers were tested for attention lapses and mind wandering. The results showed the training promoted cognitive resilience by guarding against the loss of attention during high-stress periods.

This study was based on prior research, also conducted by Dr. Jha, which provided 24 hours of mindfulness training to a group of Marine reservists before deploying to Iraq. The earlier study found that the more time spent by military service members practicing daily mindfulness exercises, the better their moods and working memory.

Because of the implications and potential to revolutionize the state of mental health for service members, the studies have received funding from the Department of Defense. The research demonstrates a link between mindfulness training and protection against attentional lapses in a shorter time frame than previous studies. Mindfulness is defined as the ability to be aware and attentive in the present, without emotional reactivity or volatility.

“Ensuring our men and women are both mentally and physically prepared is essential to mission success. This study provides important information to help us do that,” said Major General Walter Piatt, Deputy Commanding General of the U.S. Army in Europe.

If you would like more information on the David Lynch Foundation, and how TM is healing traumatic stress in at-risk populations visit them on the web at http://www.davidlynchfoundation.org/