Military Blog
You are here: Home1 / Military Connection: You Still Have “The Power of 1” By Debbie Gregory... 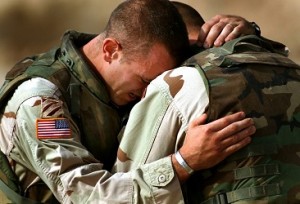 In September, Military Connection announced the launch of “The Power of 1,” a campaign administered jointly by the Department of Defense (DOD) and the Department of Veterans Affairs (VA). The idea of the Power of 1 emphasizes the belief that one person has the power to recognize warning signs, intervene, create a dialogue, or make a phone call to save someone in crisis. No one can do everything, but everyone can do something. It only takes one person or one single action to save another person’s life.

But as one suicide by a Veteran or member of the military is one too many, it is necessary to keep reminding those in crisis about the peer support and resources offered by the VA and the DOD.

Suicide is one of the leading causes of death in America among all ages and ethnicities. And it is unbearably high in military and Veteran communities. But by using the mentality instilled in service members since boot camp to look out for their comrades, the Power of 1 campaign is hoping to sharply reduce the number of suicides among active and former military members. It’s just a matter of looking out for one another.

Some indicators that your buddy may be considering suicide include talking about suicide, making plans, stockpiling medications, and withdrawing from people and activities that were previously enjoyable. People at risk for suicide could also be going through the loss of a loved one, relationship issues, financial difficulties, drug/alcohol problems, legal trouble, medical problems and more.

The Power of 1 campaign is designed to empower individuals who see these indicators, and give them the tools to help, and possibly save a life, just as they would have done in combat. The campaign encourages those needing help, or witnessing comrades in crisis, to utilize the many resources available, such as chaplains, military family life consultants, mental health clinics, peers, community support organizations, Vets4Warriors and especially the Military/Veterans Crisis Line.

When people call the Military Crisis Line at 1-800-273-8255, and press 1, they can have a confidential conversation with a peer counselor specifically trained to deal with any crisis or stresses the service member, Veteran, or family member may be facing. Calls to the crisis line are free, confidential, with trained professionals 24 hours/day, 365 days/year.

Military Connection: You Still Have “The Power of 1” By Debbie Gregory