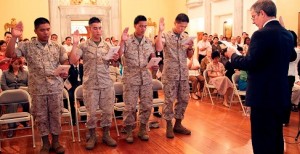 Last month, the Pentagon announced that it would allow “illegal immigrants,” meaning those without legal citizenship status, to join the U.S. military. But as of October 23, 2014, that program has been suspended.

The Military Accessions Vital to the National Interest (MAVNI) program had allowed non U.S. citizens to enlist in the U.S. armed forces, as long as they possessed a skill that was deemed “vital” to a branch or its mission. Usually, these skills included fluency in a “vital” language, an advanced engineering degree, or experience as a healthcare professional.

Last month, the plan was to expand the MAVNI program to include undocumented immigrants who fell under the Deferred Action for Childhood Arrivals (DACA) initiative. This announcement was met with a lot of passion from Americans, both from those in favor and those opposed to the expansion of the program.

Now, the official word from the Pentagon is that the program is on hold while recruiting officials can sort out a process for accurately screening MAVNI candidates.

The MAVNI program was created by the Army in 2008. The intention of the yearlong pilot program was to recruit documented immigrants with specialized skills in military occupations where there was a vital need and, in turn, offer the immigrants an expedited path to U.S. citizenship. Since inception, more than 2,900 recruits have enlisted in the military through the MAVNI program.

The program ran until 2010, when it slowed due to lack of need and the impending downsizing of forces. MAVNI restarted again in 2012, with authorization to run for an additional two years, with a 1,500-person cap. The program was set to expire September, 2014, but the program was extended through fiscal 2016. At the same time, it was extended to undocumented immigrants. But for now, the entire MAVNI program is on hold.

Officials from the Pentagon expect the MAVNI program to reopen by late November for all applicants with legal immigration status. Currently, there is no timetable for renewing the expansion of DACA beneficiaries and other applicants without legal documentation status.