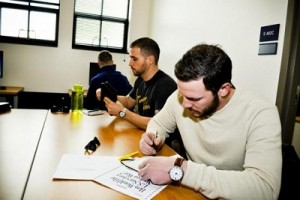 Most Americans are familiar with the deplorable Veteran unemployment rate of the last several years. Until recently, Veterans who served after September 11, 2001, were caught up in a long-standing unemployment rate that lingered around 10%. An element of that statistic could be the result of a troubling reality- that some Veterans who get jobs don’t stay employed, for various reasons.

A Veteran Job Retention Survey was recently conducted by VetAdvisor and Syracuse University’s Institute for Veterans and Military Families. The study administered an online survey between December 16, 2013 and February 11, 2014. According to the report, there were 1,248 Veterans who completed a questionnaire about their post-military employment experiences, consisting of 167 questions.

These numbers can be slightly misrepresentative. The statistics of the entire Veteran population are raised by the experience that former military officers had in their first jobs. Only 13.37% of officers left their first civilian job within the first six months, compared to an enlisted total of 30.97%. And only 26.74% of officers left within their first year, compared to an enlisted total of 48.05%. These differences in statistics are most likely the result of the officers possessing at least a bachelor’s degree, compared to a marginal percentage of the enlisted Veterans.

The survey’s questionnaire also focused on reasons why Veterans left their first jobs. The number one reason was due to “a new employment opportunity,” according to 43.28% of the Veterans surveyed. Other reasons included lack of career advancement (31.07%), quality of work not meaningful/challenging (29.52%), inadequate compensation/benefits (27.98%), inadequate professional development opportunity (23.34%), dissatisfaction with manager/supervisor (20.40%), layoffs/dismissals (16.23%), and other factors. Veterans could choose as many factors as needed to explain their reasons for leaving.

The findings of the Veteran Job Retention Survey not only show the inability of employers to hold onto Veteran employees, but also a deficiency in how employers hire Veterans. The survey recommends that employers who wish to recruit and retain Veterans develop Veteran-centric recruitment strategies and benefit programs. This can include improving awareness of the translation of military skills among their HR teams, and helping create programs to assist Veteran employees in developing a post-military career path.