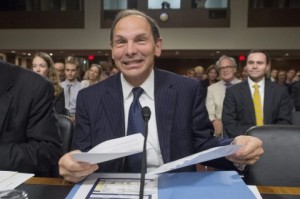 Robert McDonald, President Obama’s nominee to be the permanent secretary of the Department of Veterans Affairs (VA) addressed Congress on July 22, 2014. During his meeting with the Senate Veterans Affairs Committee, the future head of the VA vowed to transform the department, agreeing that systematic failures in transparency, accountability, integrity, and patient access to healthcare must be addressed.

“The seriousness of the moment demands urgent action,” McDonald told the Senate Veterans Affairs Committee. “There is a lot of work to do to transform the department and it will not be easy, but it is essential and can be achieved.”

McDonald is perfectly positioned to address these issues.  The former CEO of Procter &amp,amp,amp,amp, Gambleis an Army Veteran, and his father served in the Army Air Corps.  McDonald’s father-in-law was prisoner of war during WWII. McDonald also shared that he has a relative who was exposed to Agent Orange in Vietnam, and receives care from the VA, and his nephew is in the Air Force, currently deployed in the Middle East. Due to his own Veteran status and the care that his family members receive from the VA, McDonald would be vested in the quality and timeliness of the department he would be entrusted with overseeing.

If confirmed, McDonald plans to implement a Veteran-first vision for the department. His plan includes frequent video conferences with VA employees, and extensive travel to field offices around the country.

Sources say that McDonald’s confirmation is all but assured, as lawmakers from both parties have voiced their approval for McDonald’s nomination.