Military Blog
You are here: Home1 / Military Connection: A New Battle Plan for US Navy Submarines? 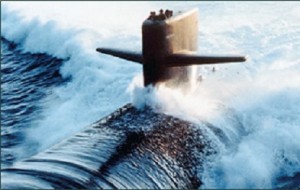 The U.S. boasts having the “world’s finest Navy” at its command. There are few old salts, modern pirates, or shipping magnates who would disagree. Although the extent of the U.S. Navy’s reach and projection of power is currently unmatched by any other naval power, the USN is constantly researching and upgrading its tactics and technologies to maintain dominance.

A recentCenter for Strategic and Budgetary Assessments (CSBA) report, entitled, “The Emerging Era in Undersea Warfare,” sheds light on the USN’s submarine developments. Submarines and Undersea Warfare (USW) are a crucial component to sea dominance and rapid evolutions in technology that are reshaping the future of USW. Authored by Bryan Clark, the report claims that these technological upgrades could negatively impact the stealth of USN subs, resulting in a major impact on the future of the Navy.

In his report, Clark urges the USN to give up its current USW concepts and establish itself as a leader in an emerging new field within undersea warfare.

Since World War II, the U.S. and all major world powers with sizeable navies have heavily invested in developing Anti-Submarine Warfare (ASW). During the Cold War, the U.S. sought to render Soviet subs ineffective by developing methods to locate and track them, rather than sink them. In the years since the Cold War, other navies have been working on methods of locating and tracking U.S. submarines. Clark recommends working now to develop new USW technologies, with companion tactics, in order to stay ahead of other navies.

Clark points out that while using low-frequency sonar and flashing light emitting diode (LED) and other methods are making submarines easier to detect, they also make it easier for subs to communicate with each other. It is for this reasons that Clark suggests that the Navy develop a new strategy of USW that moves away from the traditional solitary submarine, acting independently, into more of a flotilla of subs hunting in pods, like orcas.

The strategy that Clark suggests includes pods or packs of submarines working together, operating near 200 nautical miles from their targets by serving as mother-ships for unmanned mini-subs and unmanned aerial vehicles (drones).

By rethinking how to utilize our submarines and integrating our superiority with unmanned undersea and aerial vehicles, the USN could most-definitely extend its reign as the “world’s finest Navy.” ­­ At least long enough to develop another technology.

Military Connection: A New Battle Plan for US Navy Submarines? By Debbie Gregory