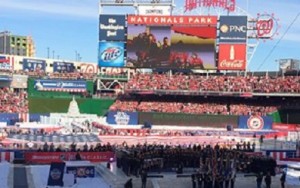 Compared to other professional sports in the U.S., such as football or basketball, hockey may not be as popular or as watched. But those who do follow the sport know that hockey is not just a game, but a way of life­ – full of traditions. And hockey fans are some of the most die-hard and loyal fans  in all of professional sports. On New Year’s Day, the National Hockey League (NHL) and its fans honored the game, their towns, and American service members.

Since 2008, the NHL has paid homage to hockey’s roots, playing on frozen ponds, by holding an outdoor game. Each year, with the exception of 2013 (due to labor disputes), the NHL sponsors the New Year’s Day games, known as the Winter Classic.

On January 1, 2015 the seventh Winter Classic game was played between the Washington Capitals and the Chicago Blackhawks. in The game, placed in Washington D.C. at National’s Park, drew a capacity crowd of 42,832. Fans gathered to see modern hockey pay homage to its heritage.

In true Winter Classic form, the Blackhawks wore throwback jerseys, based on their 1957 uniforms. Hometown team Washington Capitals wore throwback red jerseys, honoring their city with a large blue “W” and white stars. And there was plenty of  hockey played, with the game being decided in the third period. But one of the biggest “hits” of the event occurred before the  puck dropped.

As part of the opening ceremonies, nearly 200 service members from all five service branches came onto the field outside of the rink, as the U.S. Army Chorus performed the national anthem. On the ice behind them, players from area military and law enforcement hockey teams unfurled a massive 120- by 65-foot U.S. flag for the enjoyment of the hockey faithful in attendance and watching from home. The moment was punctuated with fireworks and a flyover by a pair of Air National Guard F-16 Fighting Falcons from the District of Columbia’s 113th Wing.

During the second intermission, the U.S. Army Chorus again took the field, and performed a medley of service songs. Along with the on-field ceremonies, Army Staff Sgt. Brandon J. Mahoney, Master Sgt. John R. Stricklett and Gen. Mark Milley, commander of U.S. Army Forces Command, were named the Geico Heroes of the Game.

In addition to game-day honors bestowed on service members at the Winter Classic, members of the USA Warriors wounded warrior hockey team played the Chicago Blackhawks in a scrimmage during their practice session on December 31. This was third time that the Blackhawks have scrimmaged with the team comprised of wounded service members and Veterans.

It is great to live in a country where sporting events honor traditions, history and the men and women who serve in uniform. But what’s even better is when you realize that even though the Winter Classic is only played once per year, the traditions, values and respect seen in that single event are displayed all year round. Not just in hockey, not just in Washington D.C.– but in all that we do, all across the country.