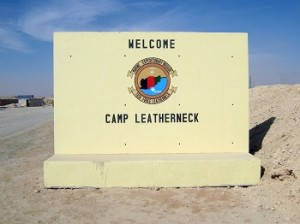 On October 26, 2014, U.S. Marines turned over their last base in Afghanistan, as they handed Camp Leatherneck in the Helmand province over to the Afghan National Army.

Both Camp Leatherneck and Camp Bastion, a British airfield adjacent to Leatherneck, were changing control, and the transfer had been kept secret from the media The Helmand province was hard fought territory for U.S. Marines and British forces. Of the 458 Marines killed in Afghanistan, 350 were lost in the Helmand province. The British lost 407 service members in the region as well.

The cloak-and-dagger switch was deemed necessary, as the Helmand province is still rampant with Taliban insurgents, as well as drug traffickers and gangs.

Giving control of Camp Leatherneck and Camp Bastion to the Afghan military marks what could be the beginning of a rapid reduction of coalition forces in Afghanistan. Approximately 24,000 U.S. service members, including Marines who are still providing security at the now Afghan-controlled Camp Leatherneck, remain in the country. That number is expected to be closer to 10,000 by January, and reduced again by 2016. The U.S. military will be watching the Helmand province with great interest for the next several months.

While many in and around the military community are criticizing the transfer due to the importance of the bases and the high-threat from Taliban in the region, it does make some sense to try to gauge the effectiveness of our Afghan allies before the end of this year, when our forces will be cut by more than half.

Since 2009, the base has been used by U.S. Marines and other American and coalition forces. Along with the land and the fortification, the Afghan military also received an estimated $230 million worth of buildings and equipment that the Marines have left behind. The Afghan Ministry of Defense is planning to use the use the 1,600-acre base to connect with Kabul, and to support its aviation operations.

The transfer of Camp Leatherneck marks the end of the Marine Corps’ thirteen year mission in Afghanistan. During their campaign in Afghanistan, Marines have fought with the valor and dedication worthy of their name. They completed every objective they were asked to, and now hand the reigns over to their comrades in different uniforms.

“We are doing exactly what our commander in chief has asked us to do,” said Capt. James  M. Geiger Jr. He continued, “We have taken great pride in this mission. We are the last Marines and we’re protecting the reputations of our brothers who paid the ultimate price.”