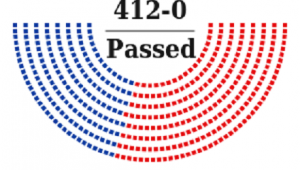 On January 6, 2015, the new Congress’ first day of conducting business, the House unanimously approved legislation that will make it more advantageous for smaller companies to  hire military Veterans.

The Hire More Heroes Act of 2015, H.R. 22, was passed by a vote of 412-0. It is believed to be the first of many bills aimed at altering President Obama’s Affordable Care Act. The health care measure, commonly referred to as “Obama Care” is currently phasing in a requirement that obligates companies with more than 50 full-time employees to provide medical coverage for its workers.

The House bill that was passed this week would create an exemption in that obligation for Veterans who are already receiving healthcare from the Department of Veterans Affairs (VA) or the military.

H.R. 22 was sponsored by Representative Rodney Davis from Illinois’ 13th District, and passed on the same day that the congressman was sworn in for his second term.

Similar legislation passed the House last year by a vote 406-1, but went nowhere in the Senate. Senator Roy Blunt from Missouri has introduced the same legislation in the Senate, and there is optimism that this Senate will approve the Hire More Heroes Act of 2015. In a written statement from the White House, the Obama administration said that it backed the measure, admitting that the bill supports “commonsense improvements” to the Affordable Care Act.