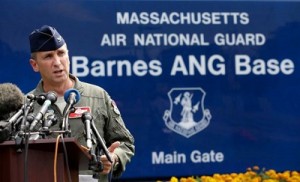 The remains of a Massachusetts Air National Guard pilot were found after a 30 hour search.

Lieutenant Colonel Morris “Moose” Fontenot Jr., who served with the 104th Fighter Wing, was flying an F-15C Eagle from Barnes Air National Guard Base, near Westfield, MA to Naval Air Station New Orleans in Louisiana. The jet was being flown there in order to receive an upgrade to its radar system.

Lt. Col. Fontenot reported an emergency while traveling at an altitude of over 30,000 feet above the Virginia-West Virginia border. About  half an hour later, a civilian pilot reported seeing smoke in a heavily forested area nearby.

While there was no further word from Lt. Col. Fontenot, officials still held on to the hope that he was alive. A rescue attempt was launched, but was hindered by the location and terrain. On Thursday evening, searchers reached the crash site and found evidence that Lt. Col. Fontenot had not ejected from the aircraft. The cause of the crash is still under military investigation.

Lt. Col. Fontenot was a1996 Air Force Academy graduate, and a decorated pilot and former squadron commander, with over 17 years of experience flying F-15. Lt. Col. Fontenot completed multiple deployments to the Middle East, and earned several decorations, including the Meritorious Service Medal.

Our condolences go out to the Fontenot family, and the Massachusetts Air National Guard.