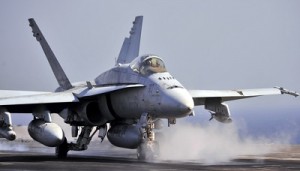 With the American air support, Iraq security forces and Kurdish forces have been able to stop the sweeping advances of Islamic State expansion, and retake the Mosul Dam. The U.S. military has been hammering ISIL forces with air strikes.

The carrier, her crew and the air wing embarked onboard were tasked to the Northern Arabian Gulf in support of air strikes on ISIL forces for as long as necessary.

There have been no reported U.S. casualties from the air strikes. American pilots and unmanned aircraft have not met with any surface-to-air resistance, only small arms fire. Meanwhile, Islamic State insurgents have suffered great losses.

The initial success of the airstrikes and the enormity of ISIL’s expansion has left Washington contemplating carrying out airstrikes against Islamic State units in Syria. While Iraq and Syria claim to maintain their sovereign borders, the actuality is that the Islamic state has claimed territory from both countries. While ISIL still occupies the territories in both countries that it currently controls, those borders are non-existent.

Many believe that the Islamic State cannot be defeated unless the force is destroyed both in Iraq and in Syria. There is also the belief  that Iraq and Kurdish forces may not be able to achieve this task without significantly more aide and involvement from the U.S. and its allies.

So far, Washington has not ordered, authorized or asked for anything beyond the airstrikes and aid that they are currently providing.