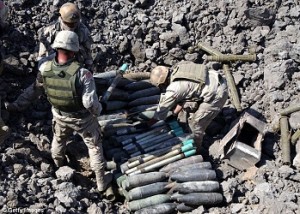 According to military accounts, American and allied forces in Iraq found approximately 5,000 chemical weapons, including bombs, warheads, and shells, stashed away by Saddam Hussein’s regimefrom 2004 to 2011. Most of the chemical weapons uncovered by the U.S. military pre-dated the 1991 Persian Gulf War, and were reported to be in deteriorating condition. By necessity, these weapons were destroyed by Explosive Ordinance Disposal (EOD) technicians. On at least a handful of occasions, these EOD techs were seriously affected through the exposure to chemical agents. There is the possibility that many other service members have been exposed as well.

On March 20, 2015, under-Secretary of the Department of the Army, Brad Carson, announced measures that the Pentagon is taking to provide care and support to service members and Veterans who are experiencing the lingering effects of chemical agents that they were exposed to as a result of their service.

Carson was appointed to his position by President Obama in January 2014. Later in the year, then-Defense Secretary Chuck Hagel tasked Carson with leading a Pentagon initiative to track down service members, across all branches, who may have been exposed to chemical agents, and provide them with medical screenings and support.

As part of this campaign, the DOD is hoping to locate and contact all personnel who served in Iraq with the Army’s 702nd, 710th or 756th Explosive Ordnance Disposal companies, or with “Bushmaster Company,” 1st Battalion, 14th Infantry Regiment. Members of these units were at particular risk because their units were called upon to destroy the deteriorating chemical weapons.

Symptoms from exposure to the chemical agents found in some of the weapons can take years to develop. Service members and Veterans may have been exposed and not even know it yet. It is critical that these individuals answer any attempts of communication from the DOD or their branch of service.

Through the Pentagon initiative, medical exams will be offered to all current and former service members who have already made their claims of chemical weapon exposure to the media. All further claimants will be provided medical treatment only through the recommendation of a military doctor following a review of medical records and interview. The reviews and interviews will be conducted by doctors and medical staff from the claimant’s branch of service. If approved, any exams will be conducted at Walter Reed National Medical Military Center in Maryland. Veterans will be given temporary orders enabling them to get the exam at Walter Reed.Veterans found to need care following the exams will be referred to the Veterans Affairs Department.

A hotline has been established for service members and Veterans to self-report possible exposure, at 1 (800) 497-6261.