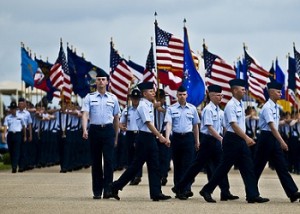 The United States Air Force (USAF) has already reached an all-time low in its force size. USAF leaders have likened the size of their combat teams to sports teams playing with a short roster. And the branch is in danger of having to make even more cuts.

Secretary of the Air Force, Deborah Lee James, has stated her displeasure at the number of service members that the USAF has had to cut in recent years due to budget constraints. Secretary James proposed a fiscal budget for 2016 that would allow the USAF end strength to expand by 4,020 active duty and 2,600 reservists.

But the secretary’s budget did not provide for sequestration, which went into effect in 2013, after the president and Congress failed to reach an agreement on taxes and spending. Lawmakers were able to provide a quick fix solution that temporarily slowed and halted many budget cuts. But unless Congress acts soon, sequestration is expected to return with a vengeance in the next fiscal year.

The difference of 10,000 service members in end force strength could have a catastrophic impact on the Air Force. Secretary James and much of the USAF leadership have already expressed concerns that any further cuts to personnel would impact the ability to maintain mission effectiveness.

Chief of Staff Gen. Mark Welsh has said that he and James do not believe the Air Force can reduce any more personnel.

“We are getting too small to succeed, as opposed to too big to fail,” said Gen. Welsh at a January15th news briefing. “So we’re at a point now where we are undermanned in many career fields because we’ve taken people out of them to put in other areas to shore up those areas.”