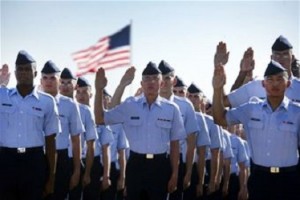 The United States Air Force has announced changes to its basic training program.

The USAF is calling the additional training “Capstone,” and it will serve as the final block of a recruit’s initial training before they can call themselves an airman. Capstone will emphasize the core values and life-skills that Air Force officials believe airmen need to succeed in both their military careers and their personal lives.

The first recruit class began training under the new curriculum last week. Their first phase of training, which includes physical and other training, will go until mid-March. Then the recruits will begin their second phase of training in 16 focus areas, starting with core values, morals and ethical decision making. The week will end with a graduation ceremony on March 20th.

In their second phase of training, the Capstone phase, recruits will be taught by a select group of military instructors and civilian contractors. This phase of training will focus on subjects ranging from the Air Force’s honor code, to respect and concern for others. Recruits will also learn how to manage finances, balance their personal and professional lives, and protect themselves against sexual harassment and rape.

Capstone is part of a larger makeover in basic training at Lackland, after more than 30 instructors at the base were investigated for misconduct with 68 recruits and technical training students. A few of the crimes happened over a decade ago, but most were within recent years. The widespread allegations of misconduct were the result of a Pentagon investigation, which found a leadership gap at the base helped fuel the crisis.Training flights were often supervised by a single non-commissioned officer, with little or no oversight.

It is hoped that a restructured basic training, including the addition of the Capstone phase and a more involved leadership structure, will lead to the development of well-rounded and battle-ready airmen.