The Marine Corps War Memorial, which depicts six U.S. servicemen raising the American flag atop Mount Suribachi during the Battle of Iwo Jima, was erected “In honor and in memory of the men of the United States Marine Corps who have given their lives to their country since November 10, 1775.”

The Battle of Iwo Jima

In early 1945, Iwo Jima was one of the last pacific islands that remained occupied by Japanese troops during World War II. The volcanic island, which takes up a mere 8-square miles, is located roughly 750 miles from the Japanese capital of Tokyo.

During the war, this island was home to two critical airfields which the U.S. military needed to gain acc

ess to. The intention was to use Iwo Jima as a stopover for aircraft destined for mainland Japan. Whether for repairs, fuel, or a brief respite for soldiers before pushing onward, the island and its infrastructure were ideal for use by the U.S. military.

And so, began the Battle of Iwo Jima. On February 19, 1945, after months of bombarding Iwo Jima via air, and three days of naval attack, the 4th and 5th Marine Divisions invaded the island.

While it was widely accepted, even by the Japanese, that Japan would not emerge victorious from this battle, the enemy mounted an unexpected defensive strategy. They did not engage with U.S. troops at the shoreline, but rather drew them further into the island for battle as Marines approached the targeted airstrips.

The Japanese military had constructed a network of tunnels through the island’s volcanic mountains to provide protection as well as a means of circumventing U.S. soldiers. Additionally, the pillboxes which they erected throughout the island provided locations to fire on assaulting troops from relative safety.

The 4th and 5th divisions struggled to ascend the mountainous sand dunes on the island, but they met minimal resistance. Their assumption was that the earlier bombardments via air and sea had rendered Japanese troops either disabled or dead. However, the troops were simply lying-in wait, and the battle lasted much longer than the United States expected.

While it only took Marines four days to reach the top of Mount Suribachi and raise the U.S. flag – the image of which has become iconic – the Battle of Iwo Jima dates much longer. It wasn’t until March 26th that U.S. victory was declared.

The final phases of the Battle began on March 11th. At this point, Japanese resistance was no longer centralized,

and American Marines were able to focus on taking out small pockets of enemy soldiers, one by one, until the island was finally secured.

The Aftermath of Iwo Jima

It is estimated that nearly 10% of the 70,000 U.S. servicemen who arrived on the island lost their lives. It is also said that of roughly 21,000 Japanese soldiers involved in the battle, only 200 were left living by the end. The Japanese just would not surrender, and individual soldiers stood their ground until the end, when they went down fighting.

What the U.S. Military expected to be a two- to three-day operation had lasted nearly five weeks. It was the bloodiest battle of World War II.

After the battle was won, Iwo Jima served as an emergency landing site for U.S. B-29 bombers, which is said to have saved the lives of nearly 24,000 airmen. Securing Iwo Jima was a step to the last and largest battle of World War II – The Invasion of Okinawa.

Due to the unexpectedly intense and long-lasting battle, the high death toll, and the fact that the battle occurred so close to the end of the war, the Battle of Iwo Jima has become one of the most well-known battles in U.S. military history. In fact, 27 Medals of Honor were awarded for action taken by U.S. servicemen during Iwo Jima. Today, this remains the highest number of Medals of Honor to come out of any U.S. military battle. 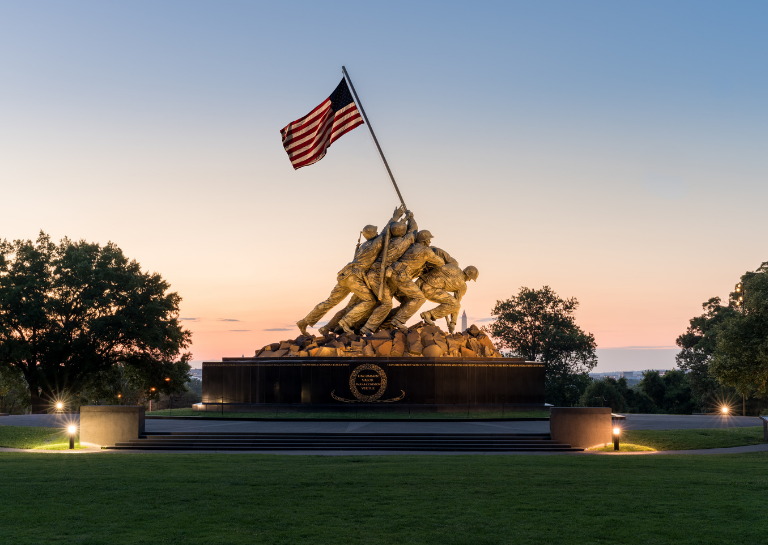 Today, on Iwo Jima’s anniversary, one thing is certain – the Battle of Iwo Jima’s significance cannot be argued. For more than half a century, a memorial immortalizing the efforts of the men who gave their lives in this battle, and many others, stands near the entrance to Arlington National Cemetery.

The Marine Corps War Memorial is one of the most well-known U.S. war memorials in existence. It was constructed by sculptor Felix De Weldon (a Navy Serviceman) after viewing Joe Rosenthal’s iconic photo of five Marines and one Navy Corpsman Soldier raising the American flag on Mount Suribachi shortly after the battle began.

In 1954 the sculpture was unveiled as a way to symbolize the spirit of the Marine Corps and was dedicated to all Marines who gave their lives for their country. According to President Nixon, “This statue symbolizes the hopes and dreams of America…to build the kind of world in which people can be free, in which nations can be independent, and in which people can live together in peace and friendship.”