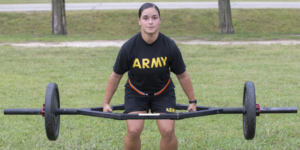 Initial standards that soldiers will have to meet to pass the new gender/age-neutral Army Combat Fitness Test (ACFT) will go in to effect October, 2020. Prior to that, some 40,000 Soldiers will participate in field testing beginning this October, which will allow for fine-tuning. Roughly 2,000 Soldiers have already taken the test, previously called the Army Combat Readiness Test.

By knowing what the criteria for the new test will be, Soldiers can start preparing for the 2020 changeover date before the launch date.

While the ACFT still keeps the 2-mile run as its final event, it introduces five others to provide a broad measurement of a Soldier’s physical fitness. The events are completed in order and can take anywhere from 45 to 55 minutes for a Soldier to finish.

Strength Deadlift: With a proposed weight range of 120 to 420 pounds, the test is comprised of three-repetition maximum deadlifts to test muscular strength; it replicates picking up ammunition boxes, a wounded battle buddy, supplies or other heavy equipment.

Standing Power Throw: This event involves throwing a 10-pound medicine ball backwards to replicate the explosive power that may be needed for a Soldier to himself/herself or a fellow Soldier up over an obstacle.

Hand-release pushups: For two minutes, the soldier does a traditional pushup, but upon reaching the floor, must raise both hands off the floor before coming back up again to reset.

Sprint, Drag and Carry: As they dash 25 meters five times up and down a lane, Soldiers perform sprints, drag a sled weighing 90 pounds, and then hand-carry two 40-pound kettlebell weights. This replicates pulling a battle buddy out of harm’s way, moving quickly to take cover, or carrying ammunition to a fighting position or vehicle.

Leg Tuck: This core-strengthening exercise starts with a pull-up, then knees are raised to elbows, and back down again for one repetition. Soldiers do as many as they can in two minutes.

Scoring could be similar to current testing, with 100 points for each event for a maximum of 600. Minimum scores, however, may change depending on a Soldier’s military occupational specialty. Soldiers in more physically demanding jobs may see tougher minimums.

Medal of Honor to be Awarded to Marine for Hue City HeroismPentagon Study Finds Mental Disorders Most Frequent Medical Diagnosis Before... Scroll to top
Follow a manual added link