Military Blog
You are here: Home / With Help from his Mistress, Army Sergeant Killed his Soldier Wife 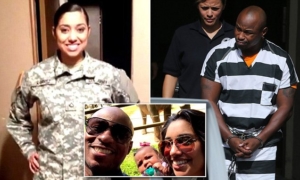 With Help from his Mistress, Army Sergeant Killed his Soldier Wife

An Army sergeant’s former mistress took the stand at his homicide trial, recounting in detail how she allegedly helped him plan and carry out the killing of his estranged wife on August 25, 2015.

Dolores Delgado, an Army veteran who served in Iraq, made up an alibi for Army Sgt. Maliek Kearney, and also let him use her car and her gun in the murder of his estranged wife. Delgado has pleaded guilty to crossing state lines to commit domestic violence resulting in a death, and could face life in prison when she is sentenced in November.

Kearney has pleaded not guilty to charges that he shot and killed Karlyn Ramirez, a 24-year-old Army private, who was stationed at Fort Meade. Kearney also staged the scene to appear as though Ramirez had been sexually assaulted.

The couple’s infant daughter, who was found alongside her mother’s body, was unharmed.

With their marriage crumbling, the couple had separated and Ramirez had obtained a protective order against Kearney. When Ramirez tried to leave Kearney, he plotted to kill her.

“If he couldn’t have her, then no one was going to have her,” said Assistant U.S. Attorney James Warwick.

Maintenance workers summoned police to the scene of the shooting after finding a door at Ramirez’s house was open.

“Fortunately,” prosecutor Warwick told the jury, “[her daughter] was not old enough to realize the gruesome death of her mother.” The girl is now being raised by Ramirez’s relatives.

Delgado has admitted a long-time affair with Kearney, which she said began before he married Ramirez and continued afterward.

As for Delgado’s role in the murder, said admitted lending Kearney her Nissan Altima, which was less conspicuous than his Jaguar. She also stayed in his apartment with his cellphone and sent a couple of text messages in order to establish an alibi. She also admitted that When Kearney returned, she torched his clothes and tossed the gun he used into Florida’s Banana River.