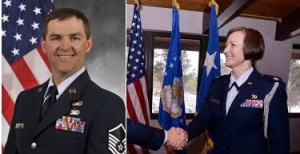 The American service members were identified as Master Sgt. Gregory Kuhse, 38, of Kalamazoo, MI and Maj. Phyllis Pelky, 45, of Rio Rancho, New Mexico. Pelky served as the aide-de-camp to the Air Force Academy superintendent. Kuhse was assigned to the 3rd Manpower Requirements Squadron at Scott Air Force Base, Illinois.

All five on board were members of the a NATO-led effort to train and support Afghan military troops, Resolute Support Mission. This is the third mass-casualty event involving transport aircraft in the war-torn country in three months, according to coalition forces in Afghanistan.

The crash of the British Puma Mk 2 helicopter is under investigation, but it was confirmed that it was an accident, and not the result of insurgent activity. An Afghan security guard who witnessed Sunday’s crash said that the helicopter struck a monitoring balloon as it was landing. Then the helicopter went down and black smoke rose from the area.

A second helicopter circled the area three or four times and then landed at a nearby airport, he said.

U.S. Brig. Gen. Wilson Shoffner, military communications chief in Afghanistan, said, “Our heartfelt condolences go out to the families and friends of those affected in this tragic incident and we pray for the full recovery of the injured.”

At Military Connection, we acknowledge the service and sacrifices made by those who serve. We extend our sincerest condolences to the families and loved ones of these brave souls.