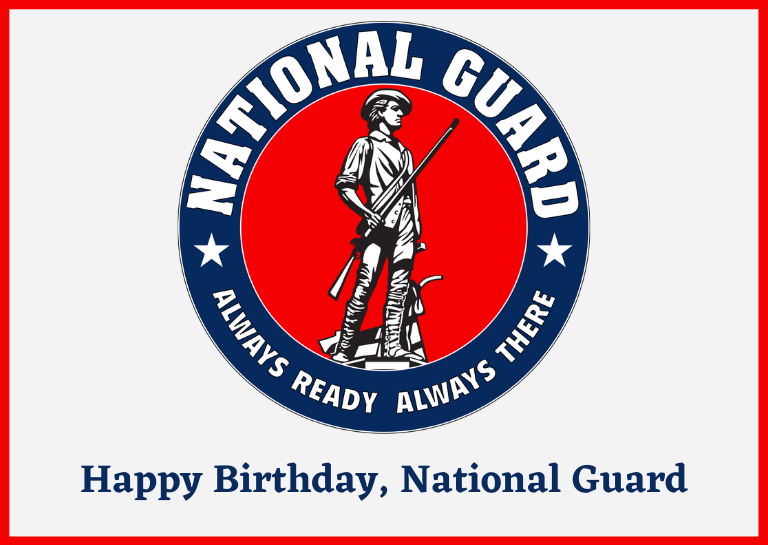 Always ready, always there – for 385 years. You read that right. The National Guard is 385 years old! It was established as part of the English Colonial Militia. This marked the beginning of an organized militia, which expanded to each of the colonies – eventually to states and territories – and today makes up military reserves in the form of Army and Air National Guard.

When Is the National Guard Birthday?

We wish a happy birthday to the National Guard on December 13th, as the oldest units were established on this date in 1636.

If you’ve read our post about the Army’s Birthday, you may be a little bit confused about how the reserve component of the Army could have been established before the Army, itself. This is simply due to a technicality. The Militia Act of 1792 permitted previously established militia units to retain their customary privileges, including dates of establishment.

What Does the National Guard Do?

The U.S. National Guard is a unique, essential branch of the military. Members of the National Guard usually hold civilian jobs while maintaining military training, part-time. This means they are always ready to serve or defend our nation.

The National Guard has the capability to respond to domestic emergencies and participate in overseas combat missions, counter drug efforts, reconstruction missions, and more. Each state has dedicated National Guard units which are mobilized, as needed, by the President or Governor of the state in which they are located.

Some Guard units celebrate on a local level with open houses, recruitment efforts, or charity work. Additionally, memorial observances for those who lost their lives as a result of their service are often held on this day.

You can get involved by volunteering with a local National Guard office or Veteran service organization like the Disabled American Veterans, Veterans of Foreign Wars, or the Wounded Warrior Project. And make sure you use #NationalGuard in any recognition posts on social media in the next few days.