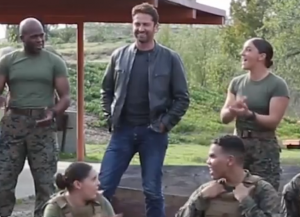 When actor Gerard Butler visited Camp Pendleton to promote his movie, London has Fallen, little did he know that the visit wouldn’t be his last.

Butler has accepted an invitation to escort a person that has only been identified as “Cpl. Maclellan” to the Marine Corp Ball in November. But whether or not that will happen remains to be seen.

There has been some push-back on the newly-minted tradition of celebrity ball invites that date back to 2011, when Sgt. Scott Moore made a video while deployed in Afghanistan inviting actress Mila Kunis. Kunis accepted, although she later admitted that at the time, she thought it was part of a Make-A-Wish event.

Since then there have been dozens of copycat videos by Marines, with invitations going out to UFC fighter Ronda Rousey, married celebrities such as Justin Timberlake, and even Michelle Obama.

Sergeant Major of the Marine Corps Ronald Green said that after a round-table with Commandant Gen. Joseph Dunford and other senior leaders, the Marine Corps planned to release a Marine Administrative Message to specifically ban Marines from making celebrity invitations.

The Marine Corps annual Birthday Ball is an occasion to flaunt the military standard of excellence in celebration of the Corps. The United States Marine Corps Birthday is celebrated every year on 10 November with a traditional ball and cake-cutting ceremony. On that day in 1775, the Continental Marines were established.

The celebrations were formalized in 1952, outlining the cake cutting ceremony, which would enter the Marine Drill Manual in 1956. By tradition, the first slice of cake is given to the oldest Marine present, who in turn hands it off to the youngest Marine present, symbolizing the old and experienced Marines passing their knowledge to the new generation of Marines.

The celebration also includes a banquet and dancing if possible. In many cases, the birthday celebration will also include a pageant of current and historical Marine Corps uniforms, as a reminder of the history of the Corps.