Military Blog
You are here: Home / General Demoted Due to Improper Text Messages 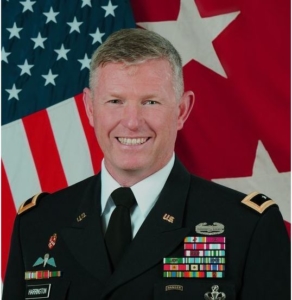 The Army has stripped a star from a general who flirted with the wife of an enlisted man that he met in Vicenza, Italy.

Maj. Gen. Joseph Harrington, the former commander of U.S. Army Africa, has been forced to retire as a one-star, the last rank at which he served satisfactorily.

Harrington and the woman exchanges more than 1,000 text messages and Facebook posts over several months.

In some messages, Harrington focused on the woman’s appearance, referring to her as “HOTTIE,” a “Lovely tease” and “looking good for sure.”

The inspector general concluded that Harrington “failed to display exemplary conduct” in engaging with the woman. News of the relationship caused “anger and polarization” at the base. Investigators found his repeated attempts to keep their relationship secret, as well as his requests for her to erase records of their chats showed that Harrington knew it was out of bounds.

The Army issued Harrington a letter of reprimand that stated:  “Over the course of four months, you participated in the exchange of flirtatious messages with the spouse of an enlisted soldier. This behavior reflects poorly on you as a senior officer and commander.”

The unnamed woman involved characterized the relationship as friendly at first, followed by teasing and oblique sexual references.

Harrington issued a statement that said, “I made a mistake by responding to and entering into a private discussion with a soldier’s spouse. While we both considered it a friendship-based conversation, it is clear that the discussion should not have occurred. I hope others can learn from and avoid my mistake.”