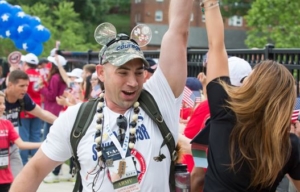 The Tragedy Assistance Program for Survivors (TAPS) Military Mentor of the Year Award recognizes outstanding support for the children of America’s fallen heroes. This year, the award goes to Army Capt. John Rhoten, who will be recognized at the annual TAPS Honor Guard Luncheon on March 6th at the Army and Navy Club in Washington, D.C.

Rhoten, a native of Stafford, Virginia, enlisted in the U.S. Army in 2002. Since that time he has deployed twice to both Iraq and Afghanistan.

Rhoten started in the Infantry and is currently a Military Intelligence officer. He is married and has two daughters. Currently, he serves at Schofield Barracks, Hawaii with the 25th Infantry Division.

TAPS provides immediate and long-term support to surviving children in part through Good Grief Camps and Campouts, bringing together military surviving adults and children across the area, encouraging them to share with others in a peer-based support network while learning about grief and trauma from some of our nation’s experts.

“As a TAPS volunteer and military mentor, John has given selflessly to honor our nation’s fallen heroes by bringing comfort and support to their surviving families,” said Bonnie Carroll, president and founder of TAPS.

As a way to honor his fallen comrades and connect with the families grieving their loss, Rhoten began serving as a TAPS mentor in 2011. He now serves as a group leader at TAPS camps, serving as a role model for other military mentors.

Mark Capra, who lost his father, Air Force Tech. Sgt. Anthony Capra in 2008, was paired with Rhoten when Mark attended a Good Grief Camp. The pairing lasted from 2012 to 2014. Capra is now a college student who is serving as a TAPS mentor to other children who have lost a loved one in the military.

“Countless mentors who have bonded with their mentee and kept their relationship for a decade,” said  Carroll. Many travel great distances throughout the year to attend graduations, birthdays, special events with the child.”

We have been proud to work with this outstanding non-profit organization for more than seven years, and look forward to that continued relationship for many years to come.