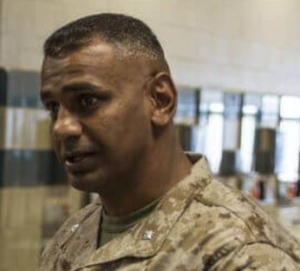 Lt. Col. Joshua Kissoon, the highest-ranking Marine implicated in the recruit abuse and hazing scandal following the death of a Muslim recruit, has pleaded guilty to charges of dereliction of duty, making a false statement and conduct unbecoming an officer. Kissoon has chosen to take an early retirement.

Raheel Siddiqui died at Parris Island after a fall that the Marine Corps characterized as a suicide. Siddiqui, in his second week on the island, was reported to have been trying to request permission to go to medical for a sore throat on the day of his death. He was refused medical attention, instead being forced to run laps in his barracks. When he collapsed on the floor, he was allegedly slapped by his senior drill instructor, Gunnery Sgt. Joseph Felix. It was then that Siddiqui supposedly ran through a door in the barracks and leaped over an exterior stairwell, falling three stories.

Kissoon’s was the final court-martial in connection with the 20-year-old’s death.

Siddiqui’s parents have maintained that their son, as both a faithful Muslim and son, was morally incapable of purposely killing himself. In Islam, suicide is a mortal sin.  They also claim that Siddiqui never had any mental health issues or threatened suicide. He had spent months training with his recruiter before boot camp in order to succeed. The family has filed a $100 million lawsuit against the federal government claiming negligence led to their son’s death.

Felix was convicted by a military court of abusing Siddiqui, as well as two additional Muslim recruits on separate occasions.

Felix received a dishonorable discharge, and was sentenced to 10 years in prison.

In total, five Marines, including Felix and Kissoon, were either convicted or pleaded guilty at courts-martial.