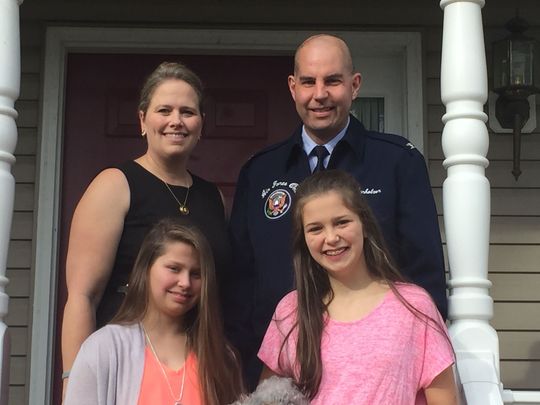 “On a personal note, I am a Gold Star Widow and am raising two beautiful daughters.”

That’s the line that randomly caught my attention on Tuesday and prompted me to comment and reach out to Ali Banholzer. As luck and fate would have it, we were both added to a “Women in Maryland Professional” group on facebook and that line was part of her introductory statement in the comments of our mutual welcome. Initially, I was lukewarm regarding my inclusion in yet another facebook group. However, Ali’s comment about her background (which also included details about her professional life as a successful business owner) captured the interest of the reporter in my heart. Gold Star Widow? Entrepreneur? That sounds like a story to be told.

Fortunately, Ali was open to spending some of her time on the phone with me and answered my facebook message right away. A day after our initial exchange, I picked up my phone and dialed Ali’s shop. Within minutes, our conversation had begun and I was almost immediately lost in her story. In the words of Jimmy Buffet, “some of it’s magic, some of it’s tragic,” but she certainly had a good story.

Since I began writing for Military Connection, I am always on the lookout for people who are on a journey that can be considered inspirational who are willing to share their story to benefit others. When I explained this to Ali, she jumped right on my bandwagon and immediately identified herself not only as one of those precious people, but she volunteered herself as a resource, ally and mentor for anyone finding themselves in similar shoes.

Before her life as a military spouse, Ali was a criminologist with her local police department. Accomplished and sporting degrees in her field, she was making moves professionally. Fast tracked and moving up in the world, that all turned upside down when she agreed to a blind date with David Banholzer in 1995. While there was no doubt they enjoyed each other’s company, both Ali & Dave figured their blind date would lead to a few months of fun but nothing more. Neither anticipated a future, but that is exactly what they found in one another.

Dave was a pilot in the Air Force. It wasn’t long after their honeymoon that the newlyweds got the orders to pack their bags and leave Fairchild AFB in Spokane, WA. So the criminologist and her AF Captain headed east to Scott AFB in Illinois. The move proved problematic for Ali’s career advancement. Dave had to live within a certain proximity of the base and Ali’s best employment option was well outside that circle. The logistics of maintaining the life of a military spouse as well as the accomplished career as a criminologist became impossible, as this move would prove to be the first of seven over the next 11 years.

Ali is resourceful and while she was sad to leave criminology, she embraced a new career with TRICARE. Even that career would be short-lived – because the duo would soon find their way to Travis AFB in California. Her move to California brought about more change for Ali, as it was during their time there that she and Dave welcomed their first daughter, a baby girl, in 2001.

Throughout his entire career, Dave’s ultimate goal was to Command Air Force One. He often told Ali that while this was his dream, flying Air Force One was like winning the lottery. You needed all of the skills and training to have a chance, but you also needed the stars to align perfectly in your favor to be given the opportunity. When Dave got the nod to fly Air Force Two out of Andrews AFB, it was a no-brainer that the family move to the East Coast to come one step closer to realizing Dave’s dream.

Baby girl #2 joined the family in 2003 and while Ali loved being a stay at home mom, the hours were long and the office space isolating. She craved adult interaction. She wanted to use her brain. Having walked away from criminology, Ali took a look at what brought joy into her day-to-day life, other than her family, and after careful consideration and thought, opened up Midnight Oil Scrapbook Designs when her youngest was six months old.

As a family, they moved from Washington to Illinois to California to Maryland to Rhode Island, back to Washington and then finally back to Maryland. As an entrepreneur, she grew her business – and grew it well. In 2007, the scrapbooking industry took a hit when the housing market boom collapsed. Fortunately, Ali was prepared and the majority of her equipment could be used as crossover equipment for the apparel design industry.

While they moved from state to state, she grew her apparel design business and her husband continued to move up in rank. He spent some of his career piloting Air Force Two, flying the Vice President and staff around. In February 2014 Dave Banholzer was named “#14,” the 14th Presidential Pilot of The United States of America’s Air Force One. There is only one pilot named as the Commander at a time, and it is the pinnacle point in a career. (Air Force One is currently on Commander #16).

Air Force One Commander is typically a position that ends in retirement, and it was the Banholzers plan for Dave to stay in the position until 2022, until their youngest daughter was finished with high school. Life had other plans for the Banholzer family. Dave had been having pain in his ankle. His ankle was twitching.

One ordinary Saturday morning in May 2014, Dave called Ali’s attention to his twitching ankle to show her the physical manifestation of the pain he had been experiencing. While showing her the twitch, he looked at her, grabbed his chest, collapsed into her arms. She lowered her husband – all 6’3”, 200 pounds of him –  to the ground. He was having a grand mal seizure. Her oldest daughter called 911 while Ali tried to prevent him from aspirating.

Their neighbors, some of them in the Air Force as well, rallied to help Ali and the girls (who were just 10 and 12 years of age). Emergency crews came and took him to Calvert Medical Center. Preliminary scans showed that Dave – who had passed his mandatory physical just 6 months prior – had a 4cm mass on the front left lobe of his brain. Commander Banholzer was flown to Walter Reed.

On May 17, just three days later, Dave endured 9 hours of brain surgery. Surgeons delivered his waiting family the news of their nightmares. “If I were you, I would retire and start making memories.” Dave had Glioblastoma, Grade 4 Brain cancer. He was terminal.

While they had to wait for final pathology to know for sure, doctors advised the family that they likely had 14 or so months, but maybe six of those would be “good.” The doctors at Walter Reed suggested that they run, not walk, to Johns Hopkins, so his care and treatment plans were transferred to Hopkins right away.

Ali is clearly no stranger to the adversities that might be faced by a military spouse. She had already abandoned her anticipated career in criminology when it didn’t necessarily fit well with her multiple moves across the country. She found a way to make waves as a business owner in three different states – that were literally a country apart. This hurdle, however, seemed insurmountable.

Ali worried about the viability of a commercial business during a time of personal turmoil. Deciding to put her focus on the care of her husband and two young daughters, Ali scaled down to one employee and brought her business back to her basement. By focusing on managing what they had instead of growth, she was able to maintain their current customers throughout a difficult and trying time.

Ali tells me that they were blessed. Though Dave was no longer allowed to pilot, he remained seizure free and therefore in command of Air Force One until February 2016, 20 months after his diagnosis. Throughout that time, he started each morning with radiation therapy on his brain before heading into work. He ran three miles every day. He faced three additional surgeries and recovered to come back to work each time. They called his cancer “The Beast” and he fought “The Beast” with every fiber of his being. 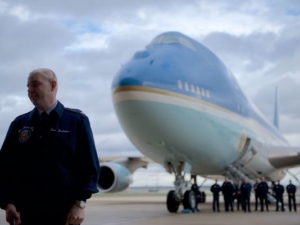 The man who had been given an optimistic six months to live had survived against the odds for 28 months – and most of those were good. Regardless, the loss of love leaves a hole in your heart that never truly heals. Ali might be indomitable, but she is still human. The military spouse was suddenly a Gold Star Widow – and while she and the girls had plenty of support from their friends still in the service, it was a completely different social landscape and they all needed time to adjust. She took six months to mourn and regroup before reopening a commercial space in April 2017.

As always, Ali and her company are Military Proud. She currently employs three military spouses and a military child in addition to other staff members. She always looks to hire military first. In fact – she is currently gearing up for her busy season and is looking to hire some part-time, temporary employees to fill in, as-needed for the business. While they are open to anyone who fits that description, they are looking to the military community first to fill that need.

The commercial space in Huntingtown is over 4000 square feet and features a sales showroom.Their work ships internationally, though the predominant customer base is Calvert County, MD.

I asked Ali for words of wisdom for other military spouses in similar situations. Her biggest piece of advice was this: Fail Forward. In her opinion, there is really no such thing as failure. Everything is a learning opportunity. When her plans needed to change, Ali sat back and looked at her skill set, her personal assets, her life and then plugged in what she needed for success.

“Truly evaluate what you love. Do you love interacting with people socially? Do you love being creative and designing? Don’t get hung up on titles and degrees. You do not need an MBA to be successful in business!”

Ali is the first to speculate that an MBA might have moved her along the path with a little more speed – but she is quick to point out that she is still here and the future is very, very bright. “Look at what you love and see how you can make a career out of it. It doesn’t mean everything can be a career. You do need to do your homework and your research.”

She also advises that slow growth is good growth. She started with cut vinyl that utilized the same equipment as her scrapbook supply work. She made banners and shirts…and once that was full and successful, she added silk screening. After silk screening, she added embroidery. The machines she purchased are industrial and built to last. It might have been a little frustrating during the process, but the industrial equipment was worth it for her business model in the long run.

Not every hobby or skill translates into a career as fluently as Ali’s creative passions. Self-employment is never a get-rich-quick scheme and always takes more than just a little hard work, dedication and elbow grease. Self-employment can be extraordinarily fulfilling, particularly for the military spouse who spends most of his or her time performing one of the most important roles of all: supporting our active duty service men and women as they serve our country.

Are you a military spouse looking to make some extra money? Ali and her staff are coming into their busy season and they are looking to hire some part-time, seasonal help. If you are interested in being part of this military-friendly group, please email Ali at alison@mosdinc.com.

The Home of the Free Because of the Brave: Memorial Day 2019 Scroll to top
Follow a manual added link