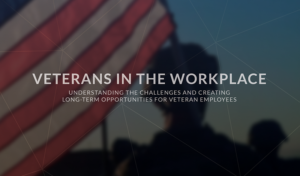 A new survey from the U.S. Chamber of Commerce’s Hiring Our Heroes program found that while civilian hiring managers have great respect for veterans and see them as valuable recruits, they struggle to understand the culture.

The study, conducted between 2015 and 2016, surveyed 400 human resource professionals nationwide, as well as 1,000 veterans who have transitioned out of the military in the last five years on their perceptions during the recruiting and onboarding processes.

Hiring managers actively look to hire veterans, see them as ideal employees, and value the contributions they make. Managers listed military experience as one of the top three recruiting priorities for their firms, with 77 percent calling their skills an important addition to the work force. Eighty percent ranked finding employees with higher education degrees that same level of importance.

With that said, they also express some concerns about hiring veterans. More than half of the hiring managers surveyed said they had little to no understanding of military rank and structure, making it difficult to match veterans’ experience with appropriate jobs.

The study, which included interviews with 400 hiring professionals and 1,000 veterans, found that business leaders have helped make their corporate culture more welcoming to transitioning troops in recent years.

The Merck Foundation funded the study.

The study also revealed that HR managers overwhelmingly see veterans as more disciplined, collaborative and hard-working than their civilian counterparts.

While less than 25 per cent of managers think their workplaces have negative biases against veterans, nearly half of the veterans surveyed said they have faced negative attitudes and treatment in civilian jobs.

Retention still seems to be an issue. Veterans who left a job within a year of being hired cited difficulty relating to colleagues and the company’s operations and culture.