Military Blog
You are here: Home1 / Calling All Retired Pilots 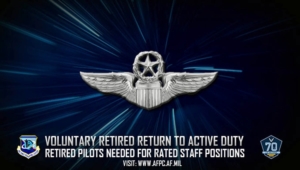 To that end, the service branch has initiated the Voluntary Retired Return to Active Duty Program (VRRAD) for pilots under the age of 60 in the rank of captain, major or lieutenant colonel, who retired within the last five years.

Pilots who held a job in the 11X career field are encouraged to apply before Dec. 31, 2018 to fill 25 flight staff positions for an active-duty tour of one year. Should those positions remain unfilled, the Air Force will extend the program deadline into 2019.

Applicants must be medically qualified for active duty with a flying class II physical; must have served in a rated staff position within the past 10 years; or have been qualified in an Air Force aircraft within five years of application.

The goal is to get experienced pilots to man staff jobs, or serve as instructor pilots to free up younger officers to get more training, and more hours in the air, which is one key to retention.

“We have a number of positions around the Air Force that require the expertise of someone who has been a military pilot, and [we] would like to be able to keep our pilots who are current in the aircraft in the aircraft and try to fill some of these vital flight slots,” said Air Force Secretary Heather Wilson.

Today’s Air Force requires 20,000 pilots to fly fighter jets, transport planes, helicopters and drones. This year, the service reported it was down 1,500 pilots. But the latest figures show the problem is getting worse, with a shortfall of 1,926 pilots.

Former airmen can apply for the program via the myPers website. Those without a myPers account  can do so at  http://www.afpc.af.mil/myPers/.