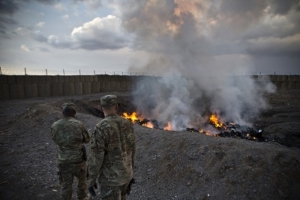 After a decades long battle, National Guard veteran Amie Muller succumbed to pancreatic cancer.  She believed it was a result of deployments to Iraq and exposure to burn pits.

According to Muller’s friend Julie Tomaska, who deployed with Muller in 2005 and 2007, Muller  loved animals and people.

“On deployment, she would draw out the misfits, because she was an ear and a shoulder, listening without judgment.”

Tomaska also suffered from chronic fatigue, headaches and digestive problems. Her disability claim with the VA was approved with a diagnosis of “environmental exposures.”

“Amie Muller served this country with distinction, and we owe her our gratitude,” Sen. Klobuchar said in a statement following Muller’s death. “I am going to keep fighting so that these veterans receive the care and support they need.”